The much waited fifth season of Colors Kannada TV Bigg Boss Kannada has finally begin in style. Sandalwood Superstar Kiccha Sudeep to host the show again for the season. Bigg Boss Kannada 5 Contestants includes some famous celebrities name along with commoners. The opening show aired on 15th October 2017 which is telecast on Colors TV, in which the host welcomed everyone in his style.

The fifth season set to play along with 17 contestant which includes 11 famous celebrities and 6 commoner participants. The show going to happen for next three month more than 100 long days. Check out below for Bigg Boss Kannada season 5 contestants name list, Game Rules, Elimination list, Show timing, voting and more. 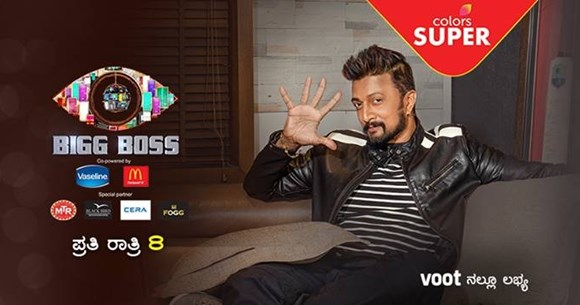 Here is the complete list of Bigg Boss Kannada season 5 with their profession and other details. The show set to host by Kiccha Sudeep, who reportedly signed with Colors TV for whopping 20 Crore pay for the season.

Jaya Sreenivasan is an well known numerologies and prominent for his numerology television shows. He previously participated in Bigg Boss season 2 as special guest.

Dayal is one of the celebritiy contestant of the season 5 of Kannada big boss. He is reowned actor, director and film producer in kannada movie industry.

Chandru is an well known personality in Kannada media industry he has featured in movies and television show. The actor prominent for hosting cookery shows.

Shruthi who is singer and actress by profession who featured in hindi serial Saath Nibhaana Saathiya. She is kannada by birth and participated in the big boss show as celebrity contestant.

Anupama is well know serial actress who feature in Akka Television serial which is telecast in Colors Kannada channel.

Karthik is an actor by profession who is along called as JK. He well known for his role in Ashwini Nakshtara and Siya Ke Ram.

Ashita is a Kannada TV Show Actress who is prominent for her roles in Jothejotheyali, Neeli.

Tejashwini is an Kannda film actress who is known for her role in Bandhu Balaga in 2008, Goolihatti in 2015.

Chandan Shetty is an Indian film score and soundtrack composer, lyricist and singer who mainly composes music in Kannada language.

Krishni Thapanda is a model and performer, who influenced her introduction with Kannada to film Akira. She is additionally chipping away at Alpavirama.

Commoner who has served as Radio Jockey and MC for corporate events.

BCA student from Mysuru, who rose to fame through Dubsmash videos.

Commoner who is a priest(Archaka) from Hubballi.

Commoner who works as a salesman for herbal products.

Commoner from Mysuru, who is a homemaker.