Here is the full list of Bigg Boss 11 Contestants: The most awaited eleventh season of India’s biggest reality show Big Boss has kick start in Colors TV on October 1st, 2017. The brand new season all set to play with 18 participants which includes celebrities and commoners.

Bigg Boss 11 (2017) is again host by non other than Superstar of Indian cinema Salman Khan. The first day first show aired on Sunday night in which Salman introduced all housemates and send them into the house. The new season to play with 18 members for three months approximately 100 days. Check out below for Bigg Boss 11 contestants name list, Game Rules, Elimination list, Show timing, voting and more. 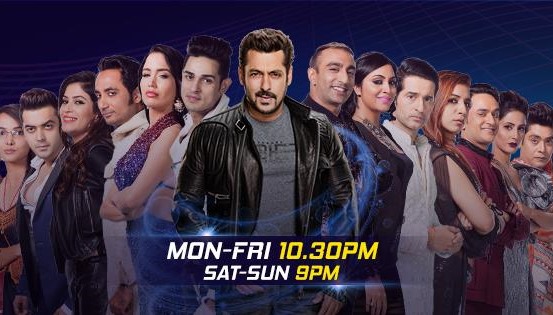 After huge success of previous season, the eleventh season of Colors Bigg boss has being with huge celebration. The new house made with huge cost which reportedly higher than previous seasons. The host Salman Khan is declared as highest paid host ever in Indian television history. Big boss 11 to telecast from Monday to Friday 10.30 Pm and in weekends (Saturday and Sunday) 9 PM along with the host.

Here is the much awaited Contestants of Bigg Boss season 11. The total number of 18 contestant from different places and profession which includes Actor, Actress, Models, Public Fame and more.

1. Hina Khan – Notable television actress who is well known for her character Akshara in Yeh Rishta Kya Kehlata Hai. She entered in to the house for 11th season of bigg boss.

4. Priyank Sharma – The handsome hunk of the season, Priyank is one more celebrity housemate of BB 11. He was seen in ongoing season of ‘Splitsvilla’.

6. Vikas Gupta – Next contestant is Vikas Gupta, who has seen make news often to enter controversial game show Bigg Boss. He last made a headlines with his friend Parth Samthaan.

9. Sapna Chaudhary – Popular Haryanvi dancer Sapna made her entry to BB house. She has performed a dance before entering into the house on the opening day.

10. Akash Dadlani – One more commoner contestant who is claimed as professional rapper. He born and brought up in USA and impressed Salman on first day which introduction.

11. Lucinda Nicholas – She is an international particiapant of the season. From Australia, she claimed as former beaty queen.

12. Mehajabi Siddiqui – She looked overconfident on the show, and is a part of the ‘commoners list’.

13. Luv Tyagi – Is one more commoner contestant who is made impression among audience on first day with his confidence to take on celebrities.

14. Sabyasachi Satpathy – A classical dancer by proffesion. From Odisha, Sabyasachi is an non celebrity contestant who entered into the house to take on other participant.

Zubair Khan, Puneesh Sharma, Arshi Khan and Bandgi Kalra are other commoner contestants of the season who entered BB 11 house.

The above recorded 14 candidates going to live in seperate house for 70 days. Everybody will be secluded from outside world. They not permitted to utilize any contraptions including Mobile telephone, Television, Internet and others.

Aggregate of 60 cameras set around house and they will be noticed each and every second. Every week one challenger will be killed from the show. The removal of bigg supervisor telugu for every week is going to done after open voting survey.