Charming actress of kollywood, Keerthy Suresh set to romance Superstar Ilayathalapathy Vijay in his next untitled flick ‘Vijay 60’. The movie which is helm by Bharathan to commence shoot from March 2016. Meanwhile, after huge success of Rajini Murugan Keerthy Suresh has been roped for mega budget film. The other cast & crew details of Vijay 60 yet to finalize. 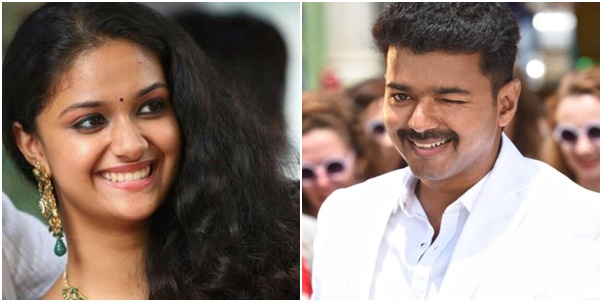 Vijay 60 will be bankrolled by famous production house Vijaya Productions, who prominent for their previous collaboration in Ajith’s Veeram. After completing ‘Theri’ Vijay all set to begin his next with director Bharathan (Azhagiya Thamizh Magan Fame). Fans are awaiting for Theri audio and trailer, Meanwhile the recent updates about ‘Vijay 60’ doing buzz round social media.

Keerthy Suresh, who having dream run in kollywood after Success of ‘Rajini Murugan’. The actress already signed five new movies in tamil and telugu for upcoming academic year. With adding more Keerthy roped in for Ilayathalapathy Vijay’s next. List of upcoming tamil movies by keerthy Suresh: Pambu Sattai, Untitled Sivakarthikeyan movie, Kodi with Dhanush and Vijay 60. Stay tune for more updates about the movie.