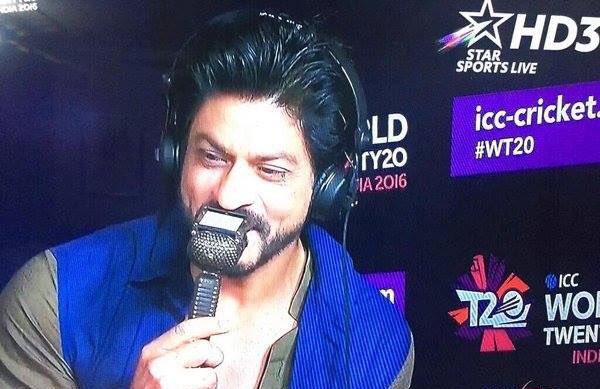 Bollywood Superstar Shah Rukh Khan who had turned commentator last night during India vs Bangladesh match in ICC World Cup 2016. The actor Got Into The Commentary Box And Couldn’t Stop Raving About Virat Kohli And MS Dhoni.

“Yuvraj can play Don, he will really suit in that character. Dhoni can surely pull of he coach of the women’s hockey team in Chak de India. Although he will give a lot of freedom to his wards but will definitely have his own version of the iconic speech from the movie,” he said before his stint came to an end.

On joining Zaheer Khan and Shoaib Akhtar by his side, Shah Rukh spoke on a variety of cricket topics including his early career as a keeper for the school team and a chance to go higher up the level with a Lala Amarnath camp.

YES YES YES.!!! Thank you India my poor heart was in my lap!!! Uff don’t keep it this close next time please.