‘Neenga Dhan Yen Kadhalana? Oru Kiss Kodunga Please’ When we thought Oviya is doing this because of Bigg Boss Task, then it absolutely wrong. She keep on torturing co-contestant Aarav by asking the same. A week ago, People trends #SaveOviya hashtag in social media for voting, Now someone please spread ‘Save Aarav from Oviya’? 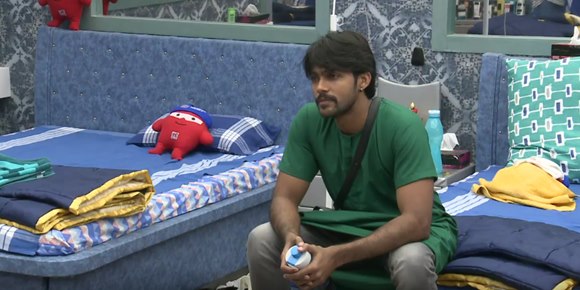 Oviya who had crush on Aarav since the day one and proposed him in very first week. However, Aarav doesn’t showed any interested on her. Since then we have witnessed lots of story between two of them.

Aarav, is an Model who is featured in many television commerical and acted in few movies. He entered Bigg Boss house to reach new place in kollywood industry. By keepoing all his desires, He keep ignoring Oviya proposal from week one.

However, He havn’t fight with her in any places. When everyone cornered Oviya in week 2, He is one who had discussion with her and made her feel comfortable in the house. Since then they both have done many task together, Including a romantic dance of Kamal Haasan song. Days passed, Aarav joined along with ‘Moovar Aani’ which includes Gayathri, Sakthi and Snehan for quite a long when Oviya done some rubbish act during 3rd and 4th week.

When Juliana made huge false statement and lie stories regarding Oviya, Aarav stood and supported Oviya in week 4. Which made her connect with him. Theu both have seen together in most of the occation in week 5 together. Which seems Oviya is still in love with Aarav.

In week 6, When everyone knows involving any conflict with Oviya is not going to help them safe in house, so they decided to ignore her. This made her feel lonely and started torture Aarav with her love proposal. Since Arav is clear about his thoughts, Oviya act for past few days doesn’t seems good. Will this acts Save her from Eviction in further weeks?