Bigg Boss Week 6 Results – Oviya Out, Juliana Evicted: The most anticipated week of bigg boss finally came to conclusion. Actress Oviya decided to opt out from the show due to mentel stress. Juliana evicted from after result poll of Week 6. 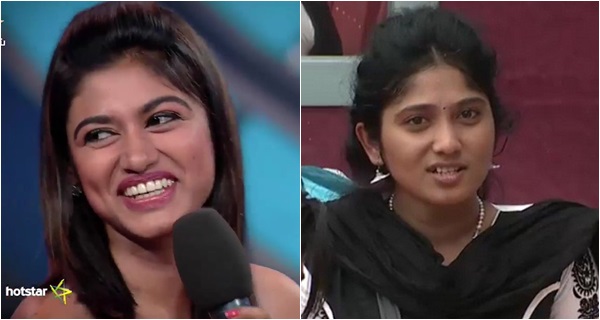 There is lots of buzz which has been going round since last week regarding Oviya. By claming She going to out from the house. Scooptimes predicted it earlier, Oviya to Out from Bigg Boss, even a week before.

On the week 6, Bigg boss given a new task and asked each contestant to play as Mentally ill patients. While Oviya is asked to play as Love failure role. By overtaking the task as advantage, Oviya started torturing Aarav by doing love proposal.

The story getting big when Aarav denies her proposal everytime. Housemates felt uncomfortable between this conflict among Aarav and Oviya. When every other contestant like Gayathri, Sakthi, Juliana, Raiza not like to involve in this fight, Snehan came up and try to solve it.

Nothing goes well, Oviya adamant with her decision on love Aarav. She not like to be friend of him, so decided to opt out from Big Boss house. She played a drama by attempting sucide in swimming pool. After the story hits high point, Bigg Boss allow her to out from house.

Meanwhile the voting poll of Week 6 has been out. Juliana evicted from the big boss show after receiving lesser vote than Oviya and Vaiyapuri. Along with Oviya, two people evicted from bigg boss this week.

Aarav, the model from Trichy who came with big dream to win the title of Bigg Boss and to enter kollywood industry. He is someone who is clear in his thoughts. However in last week, He has been shown in different angle. Will this going to end Aarav journey in bigg boss house? Let’s see.