Beep Song, The talk of the town which sung by Simbu goes viral in all social media. After huge Controversy, Anirudh officially released a statement about Beep Song.

Check Out below for Anirudh statement about Beep Song:

I was preoccupied with my concert in Toronto dedicated to the flood victims in Tamilnadu. I would like to clarify my stand on the subject of the beep song. It is neither my composition nor my lyrics and I am not the singer. Unfortunately and to my dismay, my name has been dragged into this controversy. I have the greatest regard and respect for women as can be clearly seen in many of my own compositions. I deeply regret this undesirable situation putting an end to all speculations regarding the same.
Love,
Anirudh 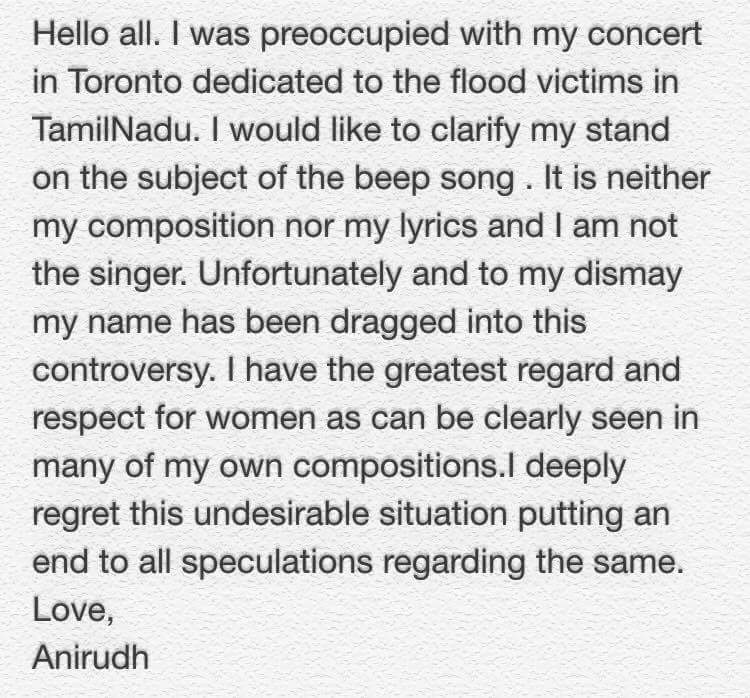 According to the statement, Anirudh Ravichander busy on Toronto Concert which dedicated to the flood victims in Tamilnadu. About Beep Song, Anirudh confirms that he was not related to the song, neither as composer nor singer.

Reportedly, Police complaint and case failed over Simbu and Anirudh by Coimbatore Police for Beep Song. After Anirudh escaped from the issue, Now all lights over Simbu. The actor has to clarify the beep song issue.