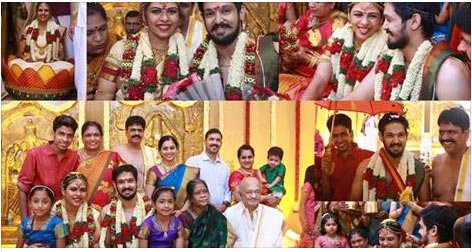 Nakul Married to Sruti Bhaskar: Tamil actor Nakul has entered into wedlock with Sruti Bhaskar on Sunday, Feb. 28. The wedding ceremony held at chennai which is attended by many celebrities, relatives and close friends of couple. Nakul tied knot to his long-time girl-friend Sruti Bhaskar, who is employed in an esteemed cinema chain in Chennai.

The actor made his debut tamil movie in Sharkar’s ‘Boys’ which released in 2003, Later he was seen in Kadhalil Vizhunthen, Maasilamani and Tamiluku En Ondrai Aluthavum some notable films in tamil. Not to forget, Nakul was younger brother of yesteryear tamil actress Devayani.

Nakul & Sruti Bhaskar got engaged on earlier November 2015, “Friends, I’m Happy to announce my engagement to Sruti Bhaskar. Need all your best wishes and blessings,” Nakul posted on his Twitter page on November 13th.

While talking to IANS, Nakul said “I’ve known her for the last five years and she’s been with me through my ups and downs and keeps me level-headed,”. The wedding reception of the couple expected to happen in Chennai which will ensemble by huge star celebs.

Nakul currently awaiting for his tamil movie release Narathan. And busy on the shooting for forthcoming films Brahma.com, Amali Thumali which is expected to release on 2016. Stay tune this space for more updates and photos of Nakul-Shruthi Bhaskar marriage.