NGK is a Tamil language movie written and directed by K. Selvaraghavan. Touted to be an Action Thriller, the film starring Suriya, Rakul Preet Singh, Sai Pallavi. The movie produced by Dream Warrior Pictures and Music composed by Yuvan Shankar Raja. NGK released on 31 May 2019 in the Tamil language worldwide. 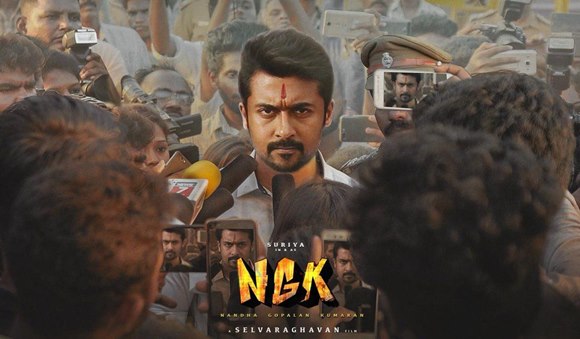 Here is the complete cast details of NGK movie including actor, actress, heroine and other character artists.

Check out below to know more details of NGK movie crew which includes producer, director, music composer, director of photography, editor and more.

Here is the review roundup summary of NGK movie by some popular online movie portals. The movie garnered mixed reviews from audience and critics. On average rating about 2 for 5 Stars.

‘On the whole, NGK is a simple political drama gone wrong.’ – 123Telugu

‘An oddly-put together mash-up of a movie’ – The Hindu

Watch the official Trailer/Teaser of NGK movie which is released in NGK by Sony South youtube channel.

Suriya Starrer NGK produced with a budget of 50 crores by Dream Warriors Production Company and released in nearly 2500+ screens worldwide. The film garnered mixed reviews from audience and critics. Selva and Suriya combination failed to meet the audience expectation in a big part.

The movie had a huge opening across south India and managed to gross 10 crores on its first day. With summer holidays on due, NGK survived for the first week of its release and recovered its investment. However, NGK failed to create magic at the box office.