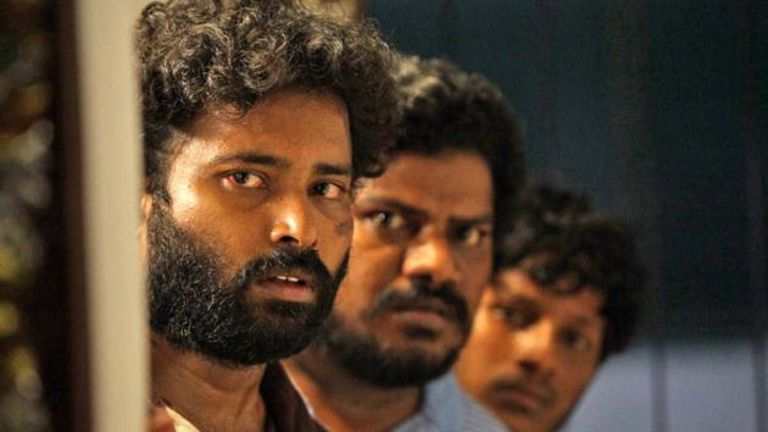 Here is the review roundup summary of Visaranai movie by some popular online movie portals. The movie garnered good reviews from audience and critics. On average Visaranai rating about 4 for 5 Stars.

“Rajinikanth, Kamal Hassan are right; this film on police brutality is brilliant. Hats off to Vetrimaran who has preferred to take the road less traveled and taken Tamil cinema to a new level with Visaranai.” – First Post

“Don’t miss this real and raw film by Vetrimaaran. Every scene is a bitter reminder that there is a system out there that exists and if you are caught in it, how it might just be impossible for you to escape.” – DNA

“Some may call Visaranai to be a violent film, while most of the others may say it is a brilliant piece of art that is so real and suspenseful. But if you’re a fan of crime thriller or film that depicts pain, do not miss it!” – Behindwoods

“Visaranai is by no means only an art or docu film, but fits into the commercial arena as well as it has thrills, especially a nail biting climax, humor, action, a little painful love story in the background and above all filled with real life incidents which one can easily relate to.” – Indiaglitz

Visaranai garnered mixed high positive reviews from critics. audience and celebrities. Directed by Vetrimaran has bagged international award few days back and releasing in 250+ screens all over tamil nadu. With huge positive word of mouth, The film has opened up with good crowd on all centers. However, Visaranai movie lag in collection at box office with lesser promotion and reach among general audience. The first day box office collection of Visaranai Rs. 3 to 4 crores in tamil nadu. More done good business during first weekend, Meanwhile Visaranai released along with Bangalore Naatkal at box office.

Visaranai Hit or Flop: According to reviews and box office collection of Visaranai