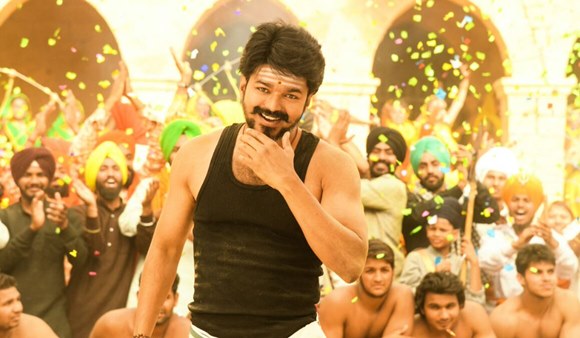 , the superstar of kollywood film industry who owns many success films in last two decades. After Rajinikanth, Vijay has most number of box office hits in ‘tamil.In earlier the actor had tough phase under his father’s directional movies. Vijay’s first breakthrough was in 1996 with Vikraman’s romance film, Poove Unakkaga.

Nerrukku Ner (1997) and Kadhalukku Mariyadhai (1997), were critically and commercially successful. Thulladha Manamum Thullum, Kushi, Friends and Priyamanavale films made good business and turn him established actor in industry. Thirumalai (2003) is huge breakthrough and made him as Mass hero, laster in 2004 Ghilli turned out as biggest blockbuster in his career as the movie collect highest gross of the year in tamil.

Later the actor had back to back success run in tamil, his films Thirupaachi, Sivakasi, Pokkiri has owed huge collection at box office. His collaboration with AR Murugadoss set new highest in box office, Thuppakki and Kaththi grossed highest collection for Vijay in his career at that time. Though had many number of hit film, the actor also own equal number of flop films.

Currently Vijay busy in her forthcoming telugu movies which awaiting for releases in 2018 and 2019.

Here is some of the best collections of Thalapathy Vijay movies to watch:

Here completing the list of Vijay Hit and Flop, Blockbuster movies: Stay tune this space for regular updates of other movies. Check out below for other actor and actress hit and flop movies box office analysis.