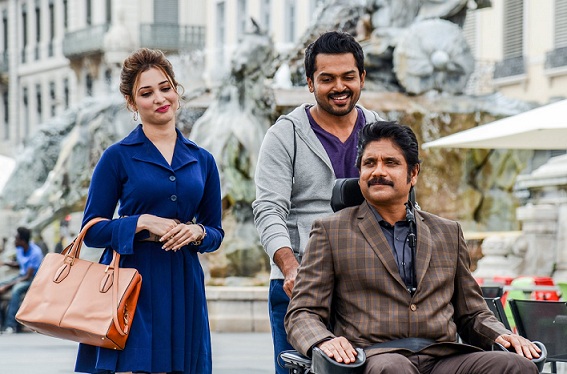 Here is the review roundup summary of Thozha movie by some popular online movie portals. The movie garnered good reviews from audience and critics. On average Thozha rating about 3.5 for 5 Stars.

‘In fact, more than the emotions, it is the laughs like this one that make the film tick.’ – Times of India

‘Friends forever- A bromance between a fifty-something billionaire and his thirty-something caretaker.’ – The Hindu

‘Thozha is a treat to watch. After all, who does not like feel good comedy- dramas that celebrates life?’ – Filmibeat

‘Thozha is an emotional drama that celebrates bromance.’ – DNA India

‘All the right buttons pressed in this Karthi-Nagarjuna film’ – Indiatoday

The movie garnered positive reviews from critics and audience as Karthi starrer stand out as full fledged family entertainer. The film mashed with major portion of romantic and comedy with fewer sentiments which ends as typical commercial entertainer. According to the reports, Thozha box office collection estimated Rs. 5 crores (Approximately) on its opening day.

Reportedly, Thozha marked as one of the biggest opener collection of tamil movies 2016. With positive word of mouth the film done stronger at box office on first weekend. The film anticipated to enter top 10 highest grosser of 2016. Stay tune for more box office collection updates.

Thozha Hit or Flop: According to reviews and box office collection of Thozha