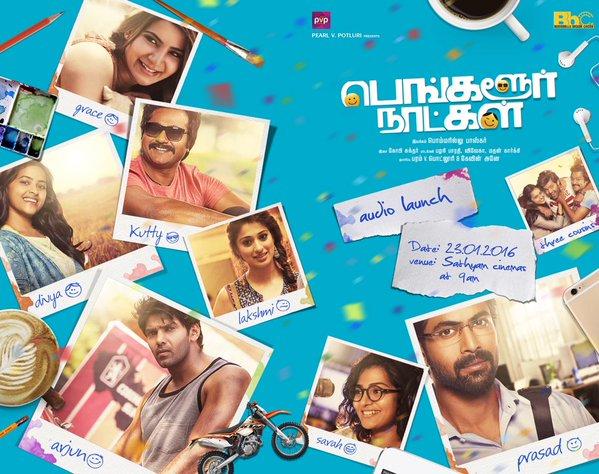 Here is the review roundup summary of Bangalore Naatkal movie by some popular online movie portals. The movie garnered good reviews from audience and critics. On average Bangalore Naatkal rating about 2.25 out of 5 stars.

“This remake doesn’t measure up to the original Malayalam superhit. What to do: Watch the original film Bangalore Days in Malayalam.” – DNA

“Overall, despite its lively storyline, Bangalore Naatkal is let down by the treatment and casual performances. Verdict: This remake might just not sweep you off your feet” – Behindwoods

“On a whole; Bangalore days is fresh, youthful and certainly a good one time watch with family for its entertainment quotient is spot on. You are sure to enjoy with friends or family. Verdict : Rana, Arya, Saranya and Parvathy make Bangalore Naatkal a delightful watch.” – Indiaglitz

” Altogether, Bangalore Naatkal would be a fine watch for those who have kept themselves away from Anjali Menon’s ostensibly superior version. For the others, it is a time-pass fare with a few good moments to take back home.” – Onlykollywood

Bangalore Naatkal garnered mixed reviews from critics and audience as the film failed to satisfy tamil audience. The original malayalam version which released in 2014 has declared as all time blockbuster. Most of tamil audience has watched ‘Bangalore Days’ in malayalam so the remake doesn’t create huge impact among kollywood movie goers. The first day Bangalore Naatkal box office collection Rs. 5 to 6 crore approximately in tamil nadu. The official figures will update by trade analysis soon. Bangalore Naatkal clashing with Visaranai, Madhavan’s Irudhi Suttru and Siddharth’s Aranmanai 2 at box office.