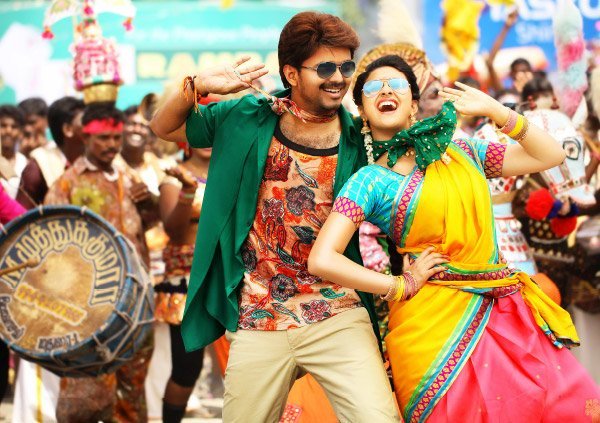 Here is the review roundup summary of Bhairava movie by some popular online movie portals. The movie garnered good reviews from audience and critics. On average rating about 2.5 for 5 Stars.

‘Hero battles villain as heroine simpers on the sidelines. a masala movie without spice or seasoning.’ – The Hindu

‘A loan recovery agent takes on a corrupt head of an educational institution to save his girlfriend.’ – Times of India

‘Vijay tries best to live up to expectations, but his latest is a big letdown’ – Firstpost

The movie garnered positive reviews from critics and audience as Vijay starrer stand out as full fledged commercial entertainer. The film mashed with major portion of action sequence and comedy with fewer sentiments which ends as typical masala entertainer. The film released in more than 2000+ screens worldwide on opening day. According to the reports, Bhairava box office collection estimated Rs. 13 crores (Approximately) on its opening day in Tamil Nadu alone.

Bhairava also doing huge business in overseas centers and according to source the film registered as second highest opening day collection for a Vijay film in US box office. Apart from US the movie doing good collections at Dubai, Singapore and Malaysia.

Bairavaa Hit or Flop: According to reviews and box office collection of Bhairava