Ajith son Aadvik Photos: Finally after almost a year, Tamil Superstar Ajith Kumar’s son Aadvik made his first public appearance. When Ajith recently visited passport office in chennai along with his wife Shalini, Daughter Anoushka and cute little son Aadvik. While fans of Ajith Kumar who worked inside office has captured some photos of Aadvik and released them on internet. The photos gone viral all over social media’s Facebook, Twitter and Whatsapp.

Aadvik Ajith Kumar, The 10 month old adorable kid who made his first public appearance and trends national wide. Reportedly, The kid who tops twitter trend list last year with a hashtag #KuttyThala in worldwide. Aadvik became popular over night after revealing his first picture on internet.

Ajith and Shalini had got married in 2000 after falling in love while shooting for 1999 hit film “Amarkalam”. Their first child Anoushka was born in 2008. And the couple blessed with a baby boy on 2 March, 2015. Here are some of the cutest pictures of Ajith son Aadvik along with his mother Shalini and Sister Anoushka.

Adorable! Zoom View of Aadvik with his Mom

Here is the Best Picture of Aadvik Ajith Kumar 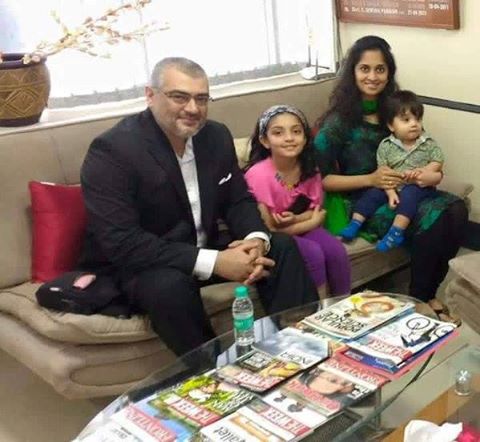