Shoaib Akhtar was continuously sledging, forcing Sehwag to play snare shot. Sehwag attempted his best to overlook, yet after at some point he lost his cool and said, “Yeh bowling kar raha hai ya bheekh maang raha hai? Viru shared this incident infront of big audience.

“Boycott can say what he wants. He once batted the whole day and hit just one four.”

Sir Geoffary Boycott is one of the greatest commentators of Virender Sehwag. Boycott calls Sehwag brainless and says his mom can bat better in English conditions. Sehwag, who ignored Boycott for the major part of his career, trolled Boycott by saying, “Boycott can say what he wants. He once batted the whole day and hit just one four.”

When reporters asked what is the difference between him and Sachin Tendulkar, Sehwag smiled and said, “our bank balance”. This is one of the most funniest statements by Virender Sehwag EVER!

“Come round the wicket and first ball I’ll hit you for a six.” 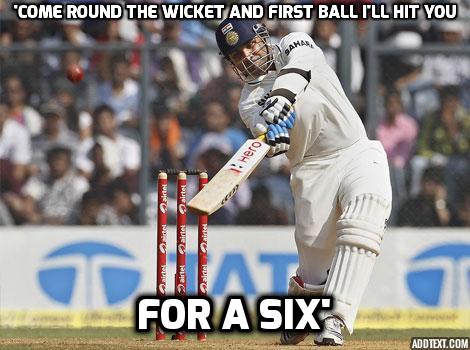 “I was batting on 291 at Chepauk, against South Africa. I told Paul Harris: ‘Come round the wicket and first ball I’ll hit you for a six.’ Interestingly, Harris accepted his advice and Sehwag dispatched for a big six. Good piece of advice, Mr. Sehwag!

Clarke was sledging Sachin by saying he is getting old and have come to bat fter spending a lot of time in the dressing room doing ‘time-pass’. Sehwag asked Clarke to stop but he didn’t. Sehwag asked him which breed he is as his teammates popularly call him ‘Pup’?