Sachin Tendulkar and Brian Lara are the players who have class with their shots. And then there are some players who have no fear in playing their shots. West Indian Viv Richards was the one who started to dominate the bowlers without fear and players like Adam Gilchrist, Sanath Jayasuriya followed. In this list, there was an Indian who went to thrash the bowlers without caring his wicket. You would have guessed it already, yes, he is ‘Nawab of Najafgarh’,’Sultan of Multan’ Virender Sehwag, he is one of the most dangerous batsman in the world.

Virender Sehwag is the only opener to score 8000+ runs in both Test and ODI format. His unique style of batting earned more fans around the world. He has 8586 Test runs and 8273 ODI runs. Arguably, he is one of the greatest and destructive player at his time.

He made his ODI debut in 1999 but scored just one fifty in his first 10 matches. But in August 2001, he got his big break, and his legendary career kicked off. A unfortunate injury to Sachin ruled him out of ODI series and Sehwag found himself promoted to opening place and scored a brilliant century in just 69 balls. That was his comeback innings in his ODI career.

He took all the pressure from his opening partner Sachin Tendulkar and allowed Sachin to take time at the crease. At one end, Sachin would build the innings and at the other end, Sehwag would increase the team’s score in jet speed. This pair scored 4387 runs which is the second highest for a Indian pair. This formulae also worked with Gautam Gambhir.

If there was one knock that stood best amongst all, it was his 219 against West Indies in 2011 as he tharashed the West Indies bowlers in 2012. 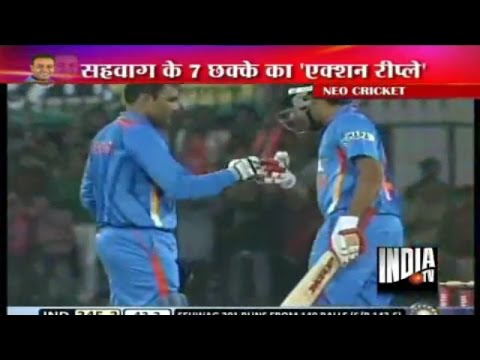 A tour to England and he played as the opener. And he did not let the team down, scoring 84 and 108 in the first two Tests. Since then, no one has been found capable to dethrone him from the opening slot.

Despite losing the first test against Australia, he scored 195 runs in just 233 balls in the first innings. If there was one Test knock that stood best amongs all, his 319 against Pakistan in Pakistan. He smashed Shoaib Akthar and his co. in Multan which earned him the title ‘Sultan of Multan’. 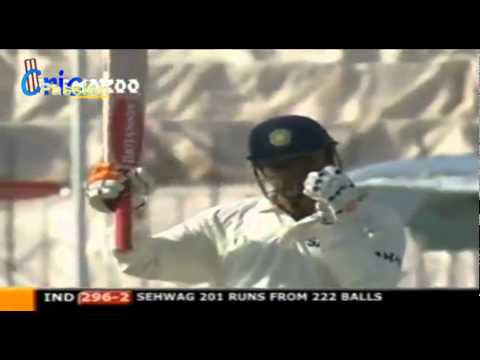 Since then, he scored his highest Test score of 319 against South Africa. He scored many more centuries and double centuries.

Sehwag once recalled an incident when Shoaib Akhtar was provoking him to play a hook shot. In his reply, Sehwag said, “Joh non-striker end pe khada hai, woh tera baap hai. Usko bol, woh maarke dikhayega.” (The guy at the non-striker’s end is your father. Tell him, he will hit). After Tendulkar hooked him for six, Shoaib walked back and Sehwag taunted him, “Beta beta hota ha, aur baap baap.” (Son is a son and father is a father).”

He announced a retirement from International cricket in 2015. Apart from his runs with bat, he also won 2007 T20I World Cup and 2011 World Cup. His retirement from cricket would have bought tears of sorrow for the cricket fans and tears of joy for the bowlers. But, he is one of the loved player and nightmare for bowlers.