Home » Top 5 Wicket-Keepers with Most Dismissals in IPL

Top 5 Wicket-Keepers with Most Dismissals in IPL 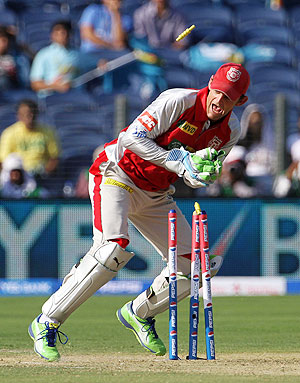 Adam Gilchrist retired from IPL 3 year ago, still he is in Top 5. This shows why people call him a legend. Being a Wicket-Keeping batsman, he made many records. He captained Deccan Chargers and lift the cup in IPL 2009. He has made 67 dismissals, 51 catches and 16 stumpings.

This young lad from Madhya Pradesh is one of the underrated wicket keeper. Though,he had played 1 ODI 1 TEST 2 T20’s in International cricket he  has a vast experience in IPL. In 97 matches he had made 69 dismissals  59 comes from catches and 10 from stumpings. He is also the leading wicket keeper in current season  (IPL 9) with 18 dismissals.

Robin Uthappa,Initially he played as a part time wicket keeper.Later with some of his stunning catches he made everyone look at him. He had dismissed 75 players ,49 catches and 26 stumpings.

Mahendra Singh Dhoni ,One of the most experienced and valuable captain and wicket keeper in IPL,Who made CSK win trophy twice he has the ablitiy to turn the match even by standing behind the stumps. He had played 143 innings and reason for only 89 dismissals including 62 catches and 27 stumpings.

Dinesh Karthik ,Started his IPL carrier from Delhi Dardevils . He is one of the most consistent Wicket keeping bastman in IPL.He had played 138 innings and made 97 dismissals  which includes 71 catches and 26 stumpings. But this season(IPL 9)  was bit  tough for him where he had only 13 dismissals  in 15 matches.