T20 is always been an treat to watch, a good start is always needed for the team to go for a big total. First Six overs of the innings is called as Power play where only 2 fielders are allowed to stand out side the 30 yard circle. Mostly people will love T20 only the start is good and here we list the top 5 runs scored by a team in power play in T20. 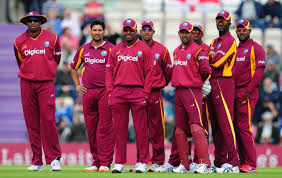 West Indies faced Australia in a group match in World T20 2009 at the Kennington Oval, London, where Australia batted first and because of 63 from David Warner and some handy contributions from lower order made 169/9 in their 20 overs.

Chris Gayle and Andre Fletcher opened the innings for Carribeans. This patnership added 83 runs in just 6 overs and 133 in 11 overs before Fletcher was out for 53 off 32 balls. Gayle made 83 runs in 50 balls which included Brett Lee’s over which went for 26 runs (3 sixes and 2 fours) in an over. 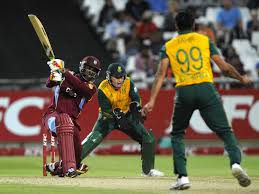 In 2015 earlier West Indies toured to South Africa, On Jan 11,2nd T20, Southh africa batted first and scored a massive 231/7, with the aid of captain Faf du Plessis making 119 and David Miller making 47 off 26 balls.In that situation West Indies were in need of an overwhelming start.

Chris Gayle and Marlon Samuels got stuck into the Proteas bowling and made 86/1 in the first six overs. Chris Gayle was 38 off 14 balls and Samuels was 28 off 13 balls.Gayle went on to  a hurricane 90 off 41 balls and Samuels 60 off 39 balls, in the end Darren Sammy made 20 off 7 balls to pull off a world record chase of 236 with 4 balls in hand.

This was the second match of the two-match T20 series between South Africa and England in 2015. The match was played at  Johannesburg and England had set a target of 172 for South africa.

Though South Africa started with 14 runs off the first 2 overs, Amla and ABD smashed Chris Jordan and Ben Stokes to make 88 runs in the first 6 overs with both openers making 40s off 18 balls. Eventually, AB de Villiers was dismissed for 71 in 29 balls and Amla (69* off 38) and Du Plessis (22*) made sure South Africa reached the target comfortably in 14.4 overs.

This was the Second match for England in group stages. South Africa who batted first, reached a total of 229/4 mostly due to the efforts of Hashim Amla, Quinton de Kock and JP Duminy, who all made fifties.

England needed some quick runs and their openers Roy and Hales provided them What they need, they smashed both Rabada and Steyn giving away 21 and 23 runs in their first over respectively. Despite losing Roy and Stokes by the time England reached 6 overs, they had made 89 runs later Joe Root’s massive inning, took them to a record 230/8, which caused them a comfortable win.

The World T20 2014 qualifying round match between the Netherlands and Ireland is remembered as one of the best T20 matche of all time. Ireland  batted first and scored 189/4, a respectable total for 20 overs cricket. But Netherlands were in need to make this total in 14.2 overs in order to knock Ireland and Zimbabwe out of the qualifying and qualify themselves.

What happened in Dutch innings was some magic, maybe. In the first 6 overs when Dutch openers Stephen Myburgh and Peter Borren went beating Irish bowlers. The Dutch raced to 91/1 in 6 overs with Myburgh on 63 off 23 balls and Borren making 31 off 15. Finally, Netherlands made 193 in just 13.5 overs with Wesley Barresi (40) and Tom Cooper (45 off 15) made sure that they qualified for the main round.