Cricket is undoubtably the most loved sport by people all over the world and Cricketers are worshiped as God in some part of the world.In India Cricketers gain more popularity than players from other country, Its never an easy task to be become a Cricketer dedication and hard work is the major thing to be a Cricket player. Here is the list of top 5 Cricketes with most likes on Facebook.

Yuvraj Singh is the most ionic batsman of India, Yuvraj played 2011 world cup and won Man of the Tournament with Cancer. He is one of the agressive batsman and has an profile of hitting 6 sixers in 6 balls in T20 World cup 2007 against England. He is inspiration for many youngsters and his motivation to play for India made every Indian to love him as a reason he has many fans all over the world and he is in 5th place with 12.18 million likes on Facebook.

Virendar Sehwag , One who revolutioned Cricket. Viru’s way of opening the innings is always a treat to watch for everyone. He made his debut in International Cricket in 1999, from then till now he is always been knowns as most destructive opener, He started the “Fearless batting ear” in Cricket . Virendar Sehwag is very knee about his interaction with his fans, he is active in Social media and on a total of 12.43 million people has liked his Facebook page.

MS Dhoni  “Captain cool” , man who made India to clinch 2011 World cup. MSD initially worked as an ticket collector in Railway and his passion was football “Goal keeper”. Dhoni in his debut match against Bangladesh scored Duck but he is not completely devasted with that his hard work made him Captain of Indain side. He was the Captain of Indian side which won the first ever T20 world cup in 2007. MSD’s crucial decision and some master class batting style has earned him some respect world wide. He retired from Test Cricket last year. His Facebook page is managed by his PA team, which has an total of 18.61 million likes.

“Master balster” , “God of Cricket” – Sachin Tendulakar is in Second place with 27.19 million likes on Facebook page. It’s quite surprising to see him in second but this won’t make any impact on his Cricketing life. Undoubtably Sachin is the finest Cricketer in this era. Man with many records such as first man to score the milestone of 200 in ODI his, Only player to have 100 century in International Cricket, and much more. Sachin Tendulkar is also a member of Raja sabha and he also recieved Arjuna award from the Government as a tribute for his Cricket life. 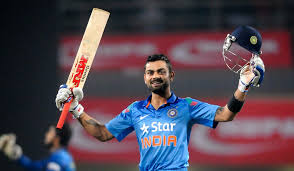 Young batsman and current captain of Indian team tops the list with a total of 30.22 million likes on Facebook. He is stylish, agressive and has fond of talent to handel any situation is the reason for many people to follow him. Virat Kholi started International Cricket at an age of 18. People call him as a replacement for Sachin Tendulkar and hence even this list proves that. Virat Kholi also has the highest female followers all over the world.