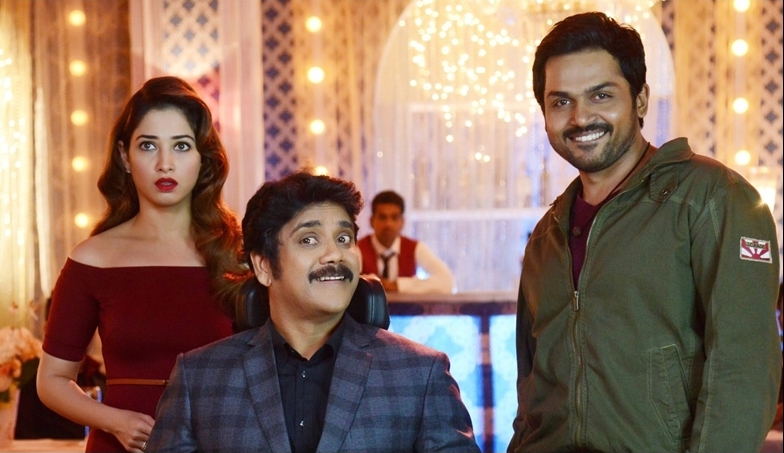 Thozha, one of the most awaited film of the season has been released finally. Karthi starrer released more than 350+ screens all over tamilnadu. After hit with previous film ‘Komban’ in earlier 2015, Karthi releasing his first movie of the year. The bilingual multi-starrer movie also released in telugu titled ‘Oopiri’ on 25th March.

Touted to be tamil romance-comedy entertainer, Kadhalum Katandhu Pogum starring Karthi, Nagarjuna and Tamannaah in the lead roles. The film written and directed by Vamsi Paidipally and produced by PVP cinema. The cast of Thozha includes some prominents names like Prakash Raj, Jayasudha, Ali, Vivek and more.

Reportedly, Karthi starrer doing good business at all centers, as per source more than 80 to 85% of screens occupied with maximum crowd on first day. According to the reports, Thozha anticipated to gross nearly 3 to 4 crores on its first day at box office, However, the official figure is yet to be released. The Tamil movie was released in many overseas circuits on the same day, and received well by the audience abroad.

After Pugazh and Kadhalum Kadandhu Pogum movies which released last week, Sethupathi Starrer has occupied maximum number of screens. Buzz doing round that Thozha doing better business than Other releases of the week. Stay tune to this space for official Thozha box office collection for opening day.