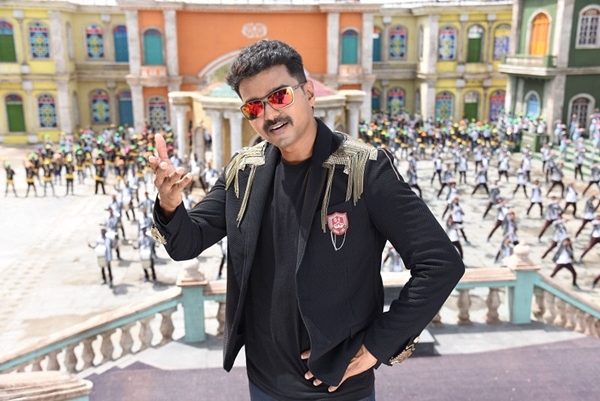 Theri, one of the most awaited film of the year has been released finally. Vijay starrer released more than 2000+ screens worldwide on Tamil new year 2016. After disaster Puli in earlier 2015, the actor came up with promising flick for the year. The movie also remake in telugu and released with title ‘Policeodu’.

Touted to be tamil Action entertainer, Theri starring Vijay, Samantha and Amy Jackson in the lead roles. The film written and directed by Atlee and produced by Kalaipuli S. Thanu’s ‘V Creation’. The cast of Theri includes some prominents names like Motta Rajendran, Mahendran, Prabhu, Radhika and more.

Reportedly, Vijay starrer doing good business at all centers, as per source more than 90 to 95% of screens occupied with maximum crowd on first day. According to the reports, Theri anticipated to gross nearly 18+ crores on its first day at box office in tamil nadu alone, However, the official figure is yet to be released. The Tamil movie was released in many overseas circuits on the same day, and received well by the audience abroad.

Releasing on holiday and summar vacation, Theri tickets booking atmost housefull in centres till first weekend. As per to the source, The movie anticipated to grass more than 25+ crores worldwide in its first day at box office.

With no tamil release for the day, Theri gearing up to record numbers of the year 2016. Shah Rukh Khan’s Fan set to release on April 15th, however its doesn’t disturb Vijay starrer in tamil nadu. Stay tune to this space for official Theri box office collection for opening day.