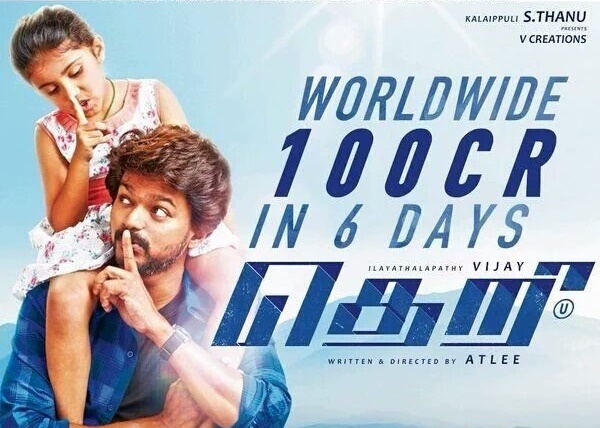 According to the source, Theri achieved this record in just 6 days from the release. The film marked as third 100 crorwe club movie from Vijay after blockbuster Thuppakki and Kaththi. Director Atlee, who was just one movie old now joined big league with success of Theri.

He also said that ‘Theri’ recorded as biggest first day collection in chennai city by grossing Rs. 1 crore at box office on the opening day. The film collected huge amound in all over tamil nadu and declared as biggest blockbuster of the year 2016.

Ilayathalapathy Vijay was the first actor from kollywood to register three 100 crore movie at box office. The actor previously achieved this along with DIrector AR Murugadoss Thuppakki in 2012 and Kaththi in 2014. Now he created new history with Atlee.

The team Theri celebrated success party at chennai which actor Vijay, Director Atlee other cast and crew members takes part in an event. The film also marked as second 100 crore clubmovie for Director Kalaipuli S. Thanu, Cinematographer George C. Williams and Acress Samantha. Interestingly all of them achieved previously along with Vijay.