Nithin’s A Aa movie released on June 2nd and doing good business at box office. The movie garnered positive reviews from critics and audience. The film released with massive opening all over Andhra Pradesh and Telangana. Check out below for A Aa box office collection for the first day. 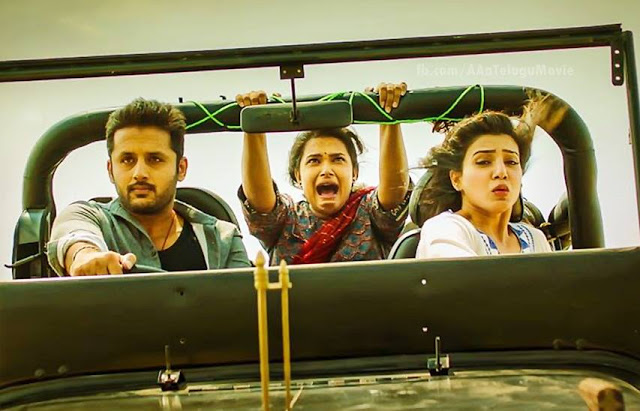 A Aa, one of the most awaited film of 2016 has been released finally. Nithin starrer released more than 500+ screens. Director Trivikram Srinivas back in 2016 after super hit S/o Sathyamoorthy in an earlier year. The collaboration of Nithin and Trivikram works in big part on silver screen.

Well, the box office prospect of the film looks bleak at the moment as the Trivikram directorial opened to average reviews from critics and fans alike. According to trade experts, the film may go on to amass close to 8 Crore rupees (approx.) by the end of its first three days worldwide. The Telugu movie was released in many overseas circuits on the same day and received well by the audience abroad.

A Family drama by Trivikram garnered huge reception from all center audience. Samantha stars in the entire movie along with Nithin in lead. Anupama Parameshwaran and other cast done their part with ease of perfection. Natarajan Subramaniam cinematography adds value to the film.

After Mahesh Babu’s Brahmotsavam for past two weeks, Now A AA grabbed maximum theaters all over the state. Buzz doing a round that A aa doing better business than other movies in all centers. Stay tuned to this space for official A Aa box office collection for opening day.