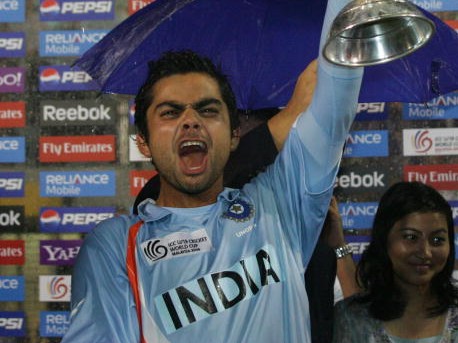 Kohli was born on 5 November 1988 in Delhi into a Punjabi family. His father, Prem Kohli, worked as a criminal lawyer and his mother, Saroj Kohli, is a housewife. He has an elder brother, Vikash, and an elder sister, Bhavna. When he was three-years old, Kohli would pick up a cricket bat, start swinging it and ask his father to bowl at him.

He was studied at Vishal Bharti Public School, Delhi. Kohli trained at the academy under Rajkumar Sharma and also played matches at the Sumeet Dogra Academy at Vasundhara Enclave at the same time. Kohli’s family lived in Meera Bagh until 2015 when they moved to Gurgaon. Kohli’s father died on 18 December 2006 due to brain stroke after being bed-ridden for a month.

In July 2006, Kohli was selected in the India Under-19 squad on its tour of England. In February–March 2008, Kohli captained the victorious Indian team at the 2008 ICC Under-19 Cricket World Cup held in Malaysia.

– Kohli was included in the squad for the home ODI series against England in November 2008 but was not given a chance to play, due to the inclusion of Tendulkar and Sehwag in the team.

– He batted at number 4 for India in the 2009 ICC Champions Trophy because of an injury to Yuvraj Singh.

– He made his T20I debut against Zimbabwe at Harare and scored an unbeaten 26.

– Virat was the part of 2011 World Cup winning squad of India.

– In 2013, He took over the captaincy of RCB team after Vettori’s retirement.

– Kohli became the first captain to score an double century in overseas.

– He is the first ever batsman to score double centuries in four consecutive series in Tests. He got those against West Indies(200), New Zealand (211), England (235) and Bangladesh (204),

– In 2015, After Dhoni’s retirement from Test cricket, he became captain for Indian Test Team.

– Early 2017, Kohli took over the limited-over captaincy from the Ms Dhoni.

That’s all about Virat Kohli Wiki, Biography, Age, Height, Weight, Family, Caste. Post your comment below and check out our latest updates.