TTV Dhinakaran, New Deputy General Secretary of All India Anna Dravida Munnetra Kazhagam (ALADMK). He is former Member of Parliament in Rajya Sabha and nephew of V.K. Sasikala. He is an important person of Mannargudi family and one among TTV brothers Sudhakaran and Bhaskaran. Check out below for TTV Dinakaran (aka) Dhinakaran Caste, Wiki, Biography, Family, Wife, Son, Age, Net Worth and more. 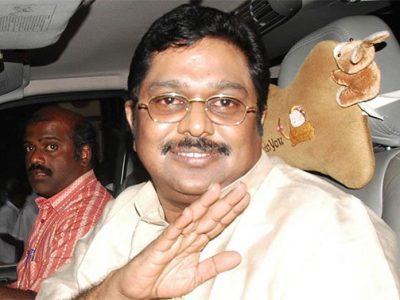 Family: Dinakaran is the son of Vanithamani (Mother), who is the elder sister of ADMK General Secretary Sasikala Natarajan. He is third son of Vekanandan and Vanithamani. Brothers Sudhakaran and Bhaskaran, Sister Shree. He is belongs to Thevar caste/ Community. Married to D. Anuradha (Wife) and he runs many ghost businesses in tamil nadu with name of his wife. Son/Daughter details will update soon – Stay tune.

Things to know about TTV Dhinakaran

With the influence of V.K. Sasikala, dinakaran introduced to ADMK party in late 1990s along with other Mannarkudi family members.

In 1999, He won general election from Periyakulam constituency and elected to Lok Sabha from ADMK party. Later in 2004 he was also a member of Rajya Sabha and served till 2010.

In 2011, after Jayalalitha sacked Mannargudi Mafia family from AIADMK party for being corruptive in many cases, Dhinakaran is one among the person. Later in 2012, Sasikala back to Poes Garden however Jaya not extended any invitation to other family members.

Dhinakaran has also been credited with grooming O Panneerselvam in 2001 and important person in ADMK from Family of Mannargudi.

It ought to be noticed that Sudhakaran was the foster son of Jayalalitha whose marriage had made a national hullabaloo against corruption and nepotism. Sudhakaran was destined to be abandoned by Jayalalitha. Dinakaran stayed near Jayalalitha and was even sent to the Rajya Sabha.

After Sasikala convicted in wealth case and sentenced for Jail along with other two members in February. Before going to prison, She elected Dinakaran as Deputy General Secretary of Anna Dravida Munnetra Kazhagam.